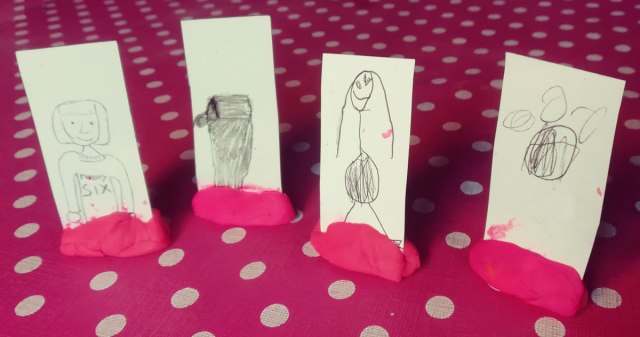 Lately I saw, in a shop, a toddler card game that helps with adult-child communication about emotions. I liked the idea of creating a dialogue with my daughters through a game, however, I did not want to start a conversation that was  forced by the pre-made cards, because it would limit them. The theme of the first game was “What is your biggest fear”.

So I proposed my children to play one of their well-known board games (a simple game where the number on the dice indicates how to advance on the track) with the following variation: instead of using the game’s tokens, I asked them to construct new pieces by drawing them on a piece of cardboard and held them upright in a base of modelling clay. Each player made two different pieces: one depicting themselves, and one depicting their biggest fear. Now the interesting part was to search, name, compare, ask opinions and detail these fears together, and finding a way to draw them. And then we started the game, throwing the dice twice: once for themselves and once for the fear of the other player. It sure added some thrill to the game. And if sometimes losing was sad, we just did a rematch!

Besides stimulating the communication about their fears, I also liked the experience because it was a new and simple way to show the kids that you can change the rules of board games or create them yourself, which I think can trigger their creativity and ability to cope with boredom (on the other hand, now I must find out how to explain the youngest that new rules should be fixed before the beginning and not invented when you need to change the outcome of the game!)

Any ideas on what else you could make the game about?

DilliC is a blog with no real purpose other than collecting our passions and hobbies. It is nothing more than a diary in which we would like to store and share things we like.

We publish our passions in order to spread our creativity and possibly receive useful feedback in return to improve ourselves.

All the thoughts, recipes, projects and ideas we publish come from our own personal experience.